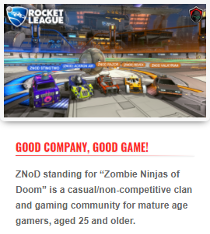 ZNoD standing for “Zombie Ninjas of Doom” is a casual/non-competitive clan and gaming community for mature age gamers, aged 25 and older.

While providing the more time restricted gamer a chance to be a part of a clan without having the commitments of a competitive one, ZNoD Gaming’s primary objective is to supply a gaming orientated social community with a fun, friendly and sporting atmosphere, where members can chat about games, organise gaming sessions, share content with each other and much more!

The clan was founded by Ray (Razor) in 2002 and was originally called “RPM” (Rounds Per Minute) which was solely for computer gaming. But as console gaming became more popular and clans began to increase greatly in numbers, a more original clan name was decided on (thanks to Aaron) and thus became “ZNoD” a gaming community and clan for all platforms.